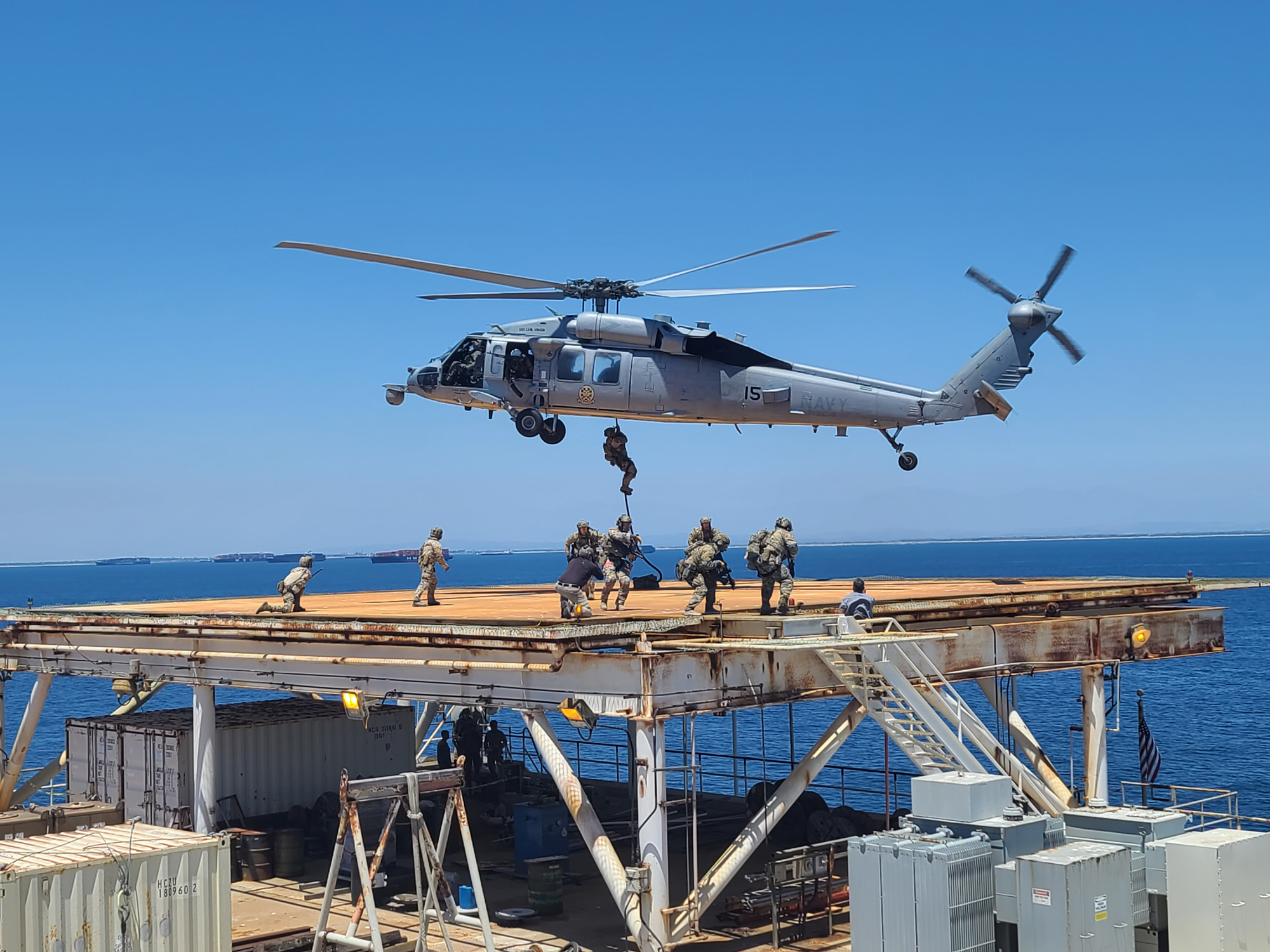 In mid-2021, Sentinel was part of a Naval Sea Systems Command (NAVSEA) program focused on port and maritime security. The program, titled ANTX-Coastal Trident based at Naval Surface Warfare Center (NSWC), seeks to advance the state of the art in countering threats and sustaining the global operations of the U.S. Navy. Program leaders brought in Sentinel as part of a multi-event effort to evaluate technical capabilities from many vendors to address operational gaps.

The exercises Sentinel participated in were conducted at the Naval Surface Warfare Center’s location in partnership with stakeholders in military, homeland defense, homeland security, and emergency response. Sentinel’s SafeGuard™ sensing solution, built to withstand the rigors of harsh Department of Defense environments, was tested on personnel in a radiological incident response exercise and on personnel supporting an underwater survey, search, and recovery exercise. Sentinel provided subject matter expertise and testing technology for these focus areas:

The first exercise featured radiological incident response and field training related to detection of radiological materials aboard an offshore oil and gas platform. Sentinel supported testing efforts featuring personal protective equipment (PPE) and sensors worn for geolocation and physiological monitoring. Following the simulated detection of radiological materials aboard the platform, personnel outfitted with Sentinel sensors boarded the platform and initiated a search for radiological signatures and cleared the location of hostile actors. An appointed individual, remotely positioned, monitored the personnel biometrics to observe readings and to stand by in case an alert was signaled for data out of normal ranges.

The second exercise featured field training by dive teams responding to a scenario featuring a sunken vessel after a fire incident. This was a simulated mass casualty event from a sinking occurring in 90 feet of water. The exercise supported several experiments focused on AR heads-up displays, remotely-operated underwater vehicles, sensors for high resolution underwater survey, and Sentinel sensors for geolocation and physiological monitoring. Sentinel sensors were placed on those assisting the divers to preemptively detect incidents concerning thermal stress and environmental stressors. For example, they looked for contact with toxicants from the contaminated dive.

As part of the exercises, Sentinel’s SafeGuard took in data from the following sensor suite: an Android smartphone, a Samsung smartwatch, a Polar heart rate monitor and strap, and the RKI G3RX-Pro gas sensor. Two individuals from the surface support team were identified to wear the sensors and be monitored starting the morning of June 22nd. They were active in assisting the divers with setup, preparation, and dive entry and exit processes over the timeframe of about 2 hours. To start monitoring, the devices were worn, activated, and automatically paired (via Bluetooth) to the smartphone. Each smartwatch featured a green “enter space” button that was pressed down for a 5 second duration to activate monitoring. The wearers’ health and safety data (physiological, environmental, and activity based) then began to be actively monitored by the remote safety attendant. This attendant could see an active dashboard (via laptop) with readings for heart rate, breathing rate, average motion level, core temperature, and data from the gas sensor: carbon monoxide, hydrogen sulfide, oxygen, Lower Explosive Limit (LEL), and broadband Volatile Organic Compound (VOC). To stop monitoring, the “leave space” button was pressed on the smartwatch app and the sensors were returned to the remote attendant for cleaning and prepping for the next set of volunteers.

In the dashboard images below, SafeGuard displays a sample session with the individual “anonymized” as the alias of Zachary Kiehl, Sentinel CEO. The health and safety data shows normal range readings except for a higher Motion Level. This likely took place when the surface support teammate was assisting in the movement of the diver in their care. Notice the heart rate is a bit elevated, which could be indicative of physical exertion, stress, or heat exhaustion. The 2nd image shows a timeframe when motion is less intense and the individual may be resting or standing still.

In both exercises, sensors were worn to collect physiological and environmental data, with mobile devices and a dashboard powered by SafeGuard alerting users to adverse health conditions or hazards. Feedback from this evaluation assisted in the continued development and implementation of SafeGuard as a safety resource for high-risk scenarios.

SafeGuard is designed for real-time health and safety monitoring of workers, warfighters, and for others in various difficult operational environments with less than one second of latency. This “Safety-as-a-Service” platform is designed to read multiple nodes of data: physiological/biometric, environmental, behavioral, and location-based.

In September, as part of this effort, Sentinel participated in the Naval Surface Warfare Center (NSWC) ANTX-Coastal Trident 2021 Technology Open House to recap our involvement in the prior exercises.

The purpose of this event was to facilitate engagement between technologists and operational stakeholders in naval operations, port and maritime security, and emergency response. This will lead to opportunities for engagement, innovation, and collaboration.

In addition to this involvement, Sentinel has been working with other groups with the Department of Defense on various funding and deployment opportunities. Sentinel is a Phase II SBIR grant recipient in the Navy ADAPT program for depot modernization. This program, without much innovation since WWII, seeks new tools, solutions, and processes for improved asset monitoring. Plus, Sentinel has been working with NAVSEA on monitoring the health and safety of confined space workers in Naval shipyards. There is an effort with the National Center for Manufacturing Sciences to develop SafeGuard for confined space use with Portsmouth Naval Shipyard. Also part of Sentinel’s work with Defense clients, an Air Force AFWERX grant was recently awarded and there’s been work with the U.S. Coast Guard’s Maritime Security Response Team to test out SafeGuard with their personnel.